Throughout Europe, national sentiment flared up in the first half of the 1800s. People began to see themselves as belonging to a nation, in the sense they were a population with a common culture, history and language. They felt a strong sense of ancestry and forged a common national identity.

The notion that it was not the princely dynasty that bound a population together, but rather the language, culture and the common way of life, was conceived by the German philosopher J.G. Herder in the late 1700s. He saw these phenomena as an expression of a deeper "national soul" that every nation had received from God. Therefore, it was also the people's right to manage their own matters. Each nation had the right to form its own state

The revolutions of 1830 in France and Belgium sparked national feelings in the Danish United Monarchy. But these national feelings were not shared by everyone. The liberal forces in Denmark felt an affinity with the other Scandinavian countries. The demand was Denmark to the Eider. Schleswig should be closely linked to Denmark, while Holstein and Lauenburg were to be separated from the monarchy. Many people in Schleswig agreed with the Danish liberals, while others joined the Schleswig-Holstein movement that wanted an independent Schleswig-Holstein. Unlike Schleswig, Holstein and Lauenburg were members of the German Confederation.

The French Revolution in 1848 acted as a catalyst to the events. The Copenhagen bourgeoisie demanded and received a free constitution in 1849. The June Constitutional law only covered the kingdom. The national forces in Schleswig-Holstein demanded a constitution that also covered the duchies as well as Schleswig's inclusion in the German Confederation. The First Schleswig War, which was a civil war, broke out. It lasted three years and ended with a modest Danish victory. The great powers intervened. The result was the Treaty of London of 1852. United monarchy was restored and Schleswig was not allowed to be more closely linked to Denmark than Holstein.

But the problems were not solved. The Danish and the Schleswig-Holstein views on the Duchies' control could not be reconciled. It led to the Danish government resuming the Eider policies. In 1863, the Danish Government adopted the November Constitution, a common constitution for the kingdom and Schleswig, while Holstein was promised its own constitution, army and administration. This was a breach of the Treaty of London. Denmark came into collision with the people of Schleswig-Holstein and a number of German states. Prussia asked for an ultimatum on the waivering of the November Constitution. Since this was not fulfilled, war broke out. The war led to fall of the united monarchy. Schleswig, Holstein and Lauenburg were ceded to the Prussian-Austrian joint government. After yet another war between Austria and Prussia, the duchies were incorporated in the Kingdom of Prussia in 1867.

While the Schleswig-Holstein citizens quickly came to terms with being Prussian nationals, the pro-Danish people from North Schleswig retained their national sentiment. From being a part of the national movement, the pro-Danish citizens should now adjust to being a national minority.

Until the late 1870s, the main objective of the Prussian State policy was to integrate the pro-Danish people of North Schleswig as loyal citizens. Police repression was directed against the critics and the optants, who in accordance with the peace treaty of 1864 chose Danish citizenship to evade military service. Even the Danish nationality did not fight the Prussian state.

The repression of the Danish minority was first apparent in the language area. The language of the Prussians and Danes was equal to their nationality. In 1876, German was introduced as the only  permissable administrative language, and two years later German was introduced as the teaching language for half the lessons in state schools. From 1888, children from North Schleswig were taught exclusively in German.

These initiatives did not lead to the desired Germanisation of North Schleswig, and from the late 1890s, the Prussians sharpened the repression of the Danish minority. Danish citizens, both migrating servants as well as resident optants were expelled. The Danish assocations were defeated, while the German associations and the German pressure in North Schleswig were supplemented.

The press bred counterpressure. A national mobilization was initiated. The countermeasure was a radical organization of the Danish minority. The objective was to maintain and preferably increase the pro-Danish numbers in North Schleswig. The organization was implemented partly at regional level and partly at local level.

The Society for conserving the Danish Language in North Schleswig was founded as a cultural main organisation in 1880. It stood behind the creation of local Danish book collections and published "The Blue Songbook" and Language Association's Almanac. The blue songbook was particularly a thorn in the eyes of the Prussian authorities with its content of patriotic songs and songs which described North Schwesvig's unfortunate situation. Their  opinion was that the blue songbook was the pro-Danish people's most dangerous agitation agent.

Vælgerforeningen for Nordslesvig (the Voters Association for Northern Schleswig) was established in 1888. It was the pro-Danish North Schleswig's party organization. The association put forward national and parliamentary candidates, campaigned and held meetings and courses. Four years later, the North Schleswig School Association was created. Its purpose was to support national education and children and youth teaching in the mother tongue. These was partly done by giving grants to young North Schlweswig citizens to stay at Danish continuation schools, high schools and agricultural and household schools.

Many Danish lecture societies were set up locally and when the Prussian authorities tried to block the Danish meetings by putting pressure on the inn keepers, the pro-Danish people built meeting halls. Folling the Danish model, an entirely new form of meeting was introduced with lectures, readings, communal singing and coffee. Meeting halls became centres for the popular Danish counterculture. 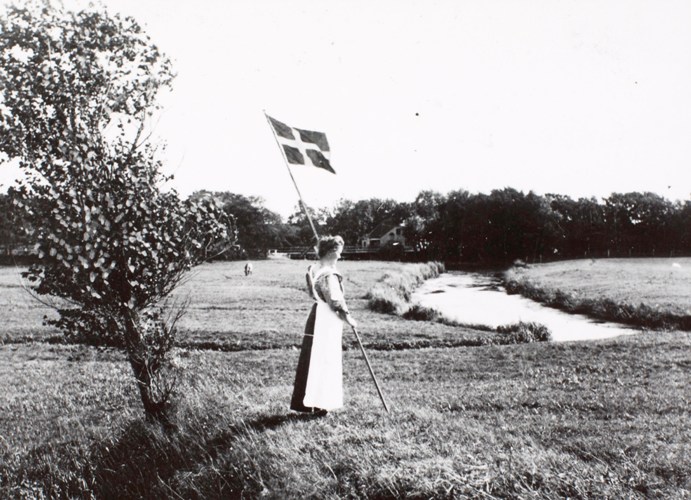 The Danish minority's national sentiment was reflected in the objects they surrounded themselves with. Inhabitants of Northern Schleswig were not allowed to hoist the Dannebrog flag, so the red/white colours took on a special meaning. They built whitewashed houses with red brick ornaments, flower beds could be established in red/white colours etc. Inside the homes, there might be coffee cups with Dannebrog, porcelain figure of the Mother Tongue on the mantelpiece and an image of the Southern Jutlander Girls on the wall to show where your national loyalties lay. On the bookshelf, Flensborg Avis lay alongside the Language Association's Almanac and the Blue Songbook.