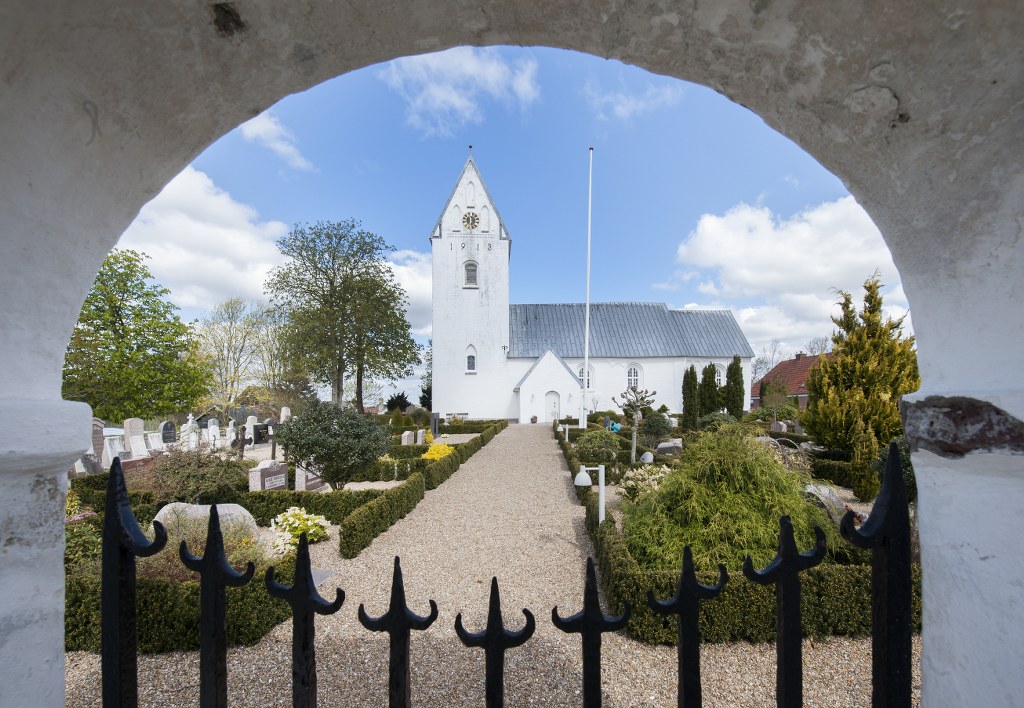 Hjortlund Church was built in the first half of the 1200s. Photo: Esbjerg Town Historical Archives, Torben Meyer.

The church building's history
Hjortlund Church lies on a mound down to the river Kongeå. Until the Reformation in 1536, the church belonged to Ribe Cathedral. Then it came under the ownership of the national lord, i.e. the Danish King Christian III in his capacity as Duke of Schleswig-Holstein. From 1580, Hjortlund Church formally belonged to the Danish crown until the church was independent in 1913.

Just like the neighbouring church, Kalvslund, Hjortlund church was built in two stages in the first half of the 1200s. The church was built in a late Romanesque style, and the building material used was mainly the volcanic tufa stones. The base is made of tufa, bricks and granite, while the chancel and the nave consist of tufa with individual parts made in brick. The connecting construction between the chancel and the nave show that the buildings were constructed separately. The porch is built of red brick and was added in the last half of the 1700s.

Until 1913, the church had two ridge turrets. On the nave was the bell spire with the church bell that rang when there were church services. The bell spire was set up in 1745 and replaced a belfry at the cemetery. Over the choir there was a little clock bell from 1848 to 1849. When the church tower was built in 1913, the spires and ridge turrets were taken down. The church tower is made of brick on a granite base and built in the same style as the rest of the church.

The baptismal font and pulpit
The Romanesque, barrel-shaped baptismal font is from the 1200s and has been through some rough treatment. In 1854, the baptismal font was painted green, and in 1873 it was plastered with sand and painted in a ”filthy yellow-grey colour”, so it looked like sandstone. The oil paint was removed in 1889 and in 1901 the plaster was tapped away with a hammer. Above the baptismal hangs an eight-sided font canopy, which originates from either 1735 or 1749.

The pulpit from 1617 was commissioned by the priest Oluf Sørensen Brun. The corner figures represent Christ and the evangelists. Among them are four niche sections that may previously have been filled with paintings or carved figures. 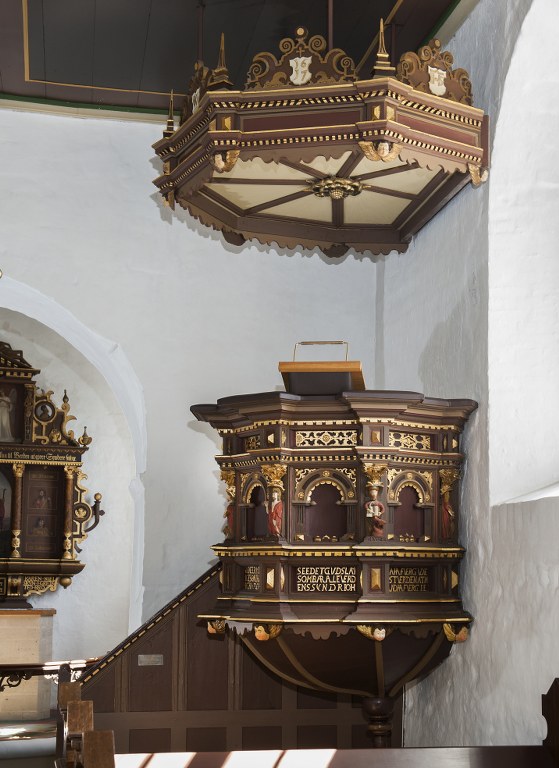 An amateur’s daubings
The altarpiece was donated by Niels Rasmussen and his wife Karen from Gredstedbro in 1608. The year and their names appear on the lower pedestal wings where NIELSKVN stands for Niels' woman, which means married to Niels. The altarpiece is supposed to be made by Mads Christensen Gamst from Revsing by Vejen and he has made similar altarpieces for churches in Vejen and Åstrup.

The altarpiece paintings are painted by Anker Lund in 1886. The main image is the Road to Emmaus, where two of the disciples meet the resurrected Christ. In the side wings you can see the four evangelists Matthew, Luke, Mark and John. The top sections show two angels playing music around the carved wooden crucifix.

In the church there are a number of older paintings hanging from the altarpiece. In 1842, the church wanted to let a local painter Hansen freshen up the paintings. The church warden wrote an application for rusks and the church scribe J. Krogh, noted that the paintings were ”of old-fashioned work, but fully adequate for the poor art sense there is in the area. An amateur’s daubings would hardly change anything ...” The painter Hansen was only allowed to paint the woodwork. The rest was left to the painter C. F. Lind. His source was Da Vinci's 'The Last Supper', which he also painted in Darum Church. 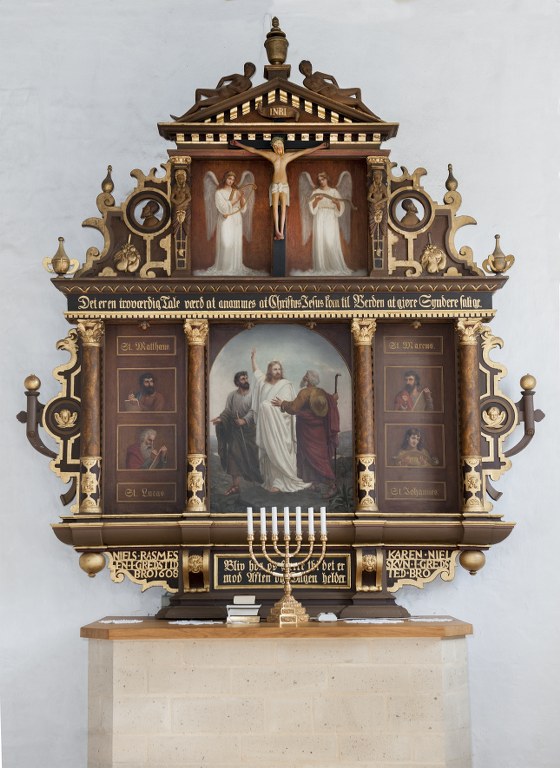 Note the lower part on the altarpiece with the names of donors. Photo: Esbjerg Town Historical Archives, Torben Meyer. 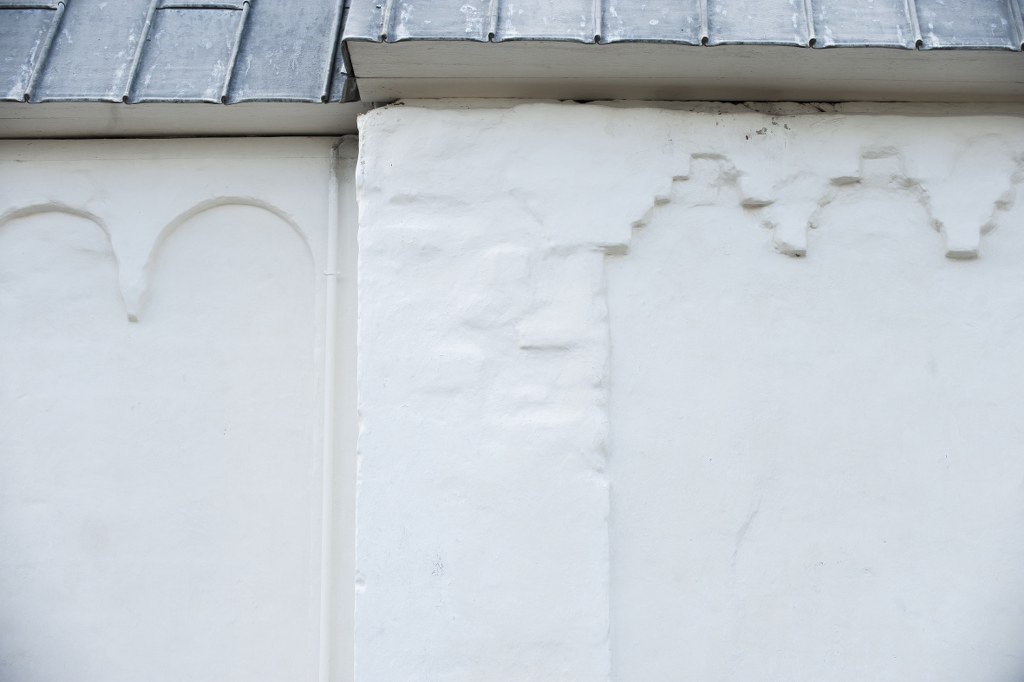 The connecting construction is clear between the chancel and the nave. Photo: Esbjerg Town Historical Archives, Torben Meyer.