Three pieces of timber
When the river Kongeå was straightened out by Gredstedbro in 1945, the digger came across three pieces of hard oak. At the time it was believed that it was the remains of an old bridge, and the wood was delivered to the Antiquarian Collection in Ribe. Almost twenty years later, the head of the Antiquarian Collection, Mogens Bencard, examined the wood from Gredstedbro once again. He discovered that it was the remains of a ship, namely a frame, a fragment of the bow and a piece of the keel. Since then, attempts have been made to look for the rest of Gredstedbro ship in vain.

The frame was cut into from one piece of wood. Photo: The Antiquarean Collection, South-west Jutland Museums.

The Kongeå in the early Iron Age
The ship’s growth rings and carbon-14 analyses have ascertained that the ship comes from the 600-700s. Only 64 growth rings had been kept in the wood, which makes the results uncertain. The ship could be from 622, but the tree was probably felled by 630, i.e. in the early Iron Age. A comparison with other ships from the time shows that the ship was probably from later in the 600s.

At that time, the landscape looked different from today. There were no dikes that prevented the sea from penetrating far into the land. The Kongeå had not been straightened out and it still had many bends, while the marshes spread gradually towards the west from Gredstedbro. However, the river Kongeå was roughly the same size as it is today. The valley of Kongeådal is about 1.5 km wide and surrounded by hill islands. The river Kongeå is 10 m wide and 1.5 m deep.

Trade connections in the Iron Age
The early Iron Age (approx. 550-750) was an unstable era greatly affected by migrations in Europe and political upheaval. The western part of the Roman Empire had fallen, and Christianity was emerging.

Denmark and the countries surrounding the North Sea were divided into small kingdoms, and Denmark was Scandinavia's strong power centre. Among the Danish power centres were Gudme-Lundeborg on Funen, Dejbjerg at Skjern and Dankirke south west of Ribe. Ribe was founded in the years 704-710.

Despite the great upheaval, trade blossomed. By comparing Danish discoveries of ceramics, glass, metals and coins with foreign discoveries, we know that the major West Jutland trading connections were the North Sea and along the Wadden Sea coast. Both land and sea were used for transporting goods. 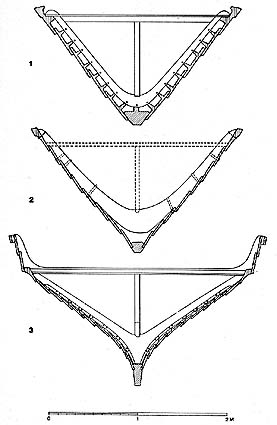 The keel in the middle shows that the Gredstedbro as a type was between the Nydam boat at the top and the Viking ship at the bottom. Photo: The Antiquarean Collection, South-west Jutland Museums.

The ship's appearance
The remains of Gredstedbro ship were in such good condition that archaeologists could determine both the type and size. The Gredstedbro ship was a roughly built oak ship with a solid frame. The ship was 20-25 m long and a mix between the Nydam boat from 310-320, the English Sutton Hoo ship from the 600s and the Viking ships from 700s. The Gredstedbro ship, Nydam Boat and Sutton Hoo ship were all rowing ships. It was not until the Vikings age that the sailing ship came to Scandinavia.

The frame was cut into from one piece of wood. The preserved part was 180 cm long, corresponding to 220-230 cm when the ship was whole. The frame was pierced with wooden nails that had held the planks in place.

The remains of the bow were 113 cm long and were of the same type as the Nydam boat.

The keel fragment on the Gredstedbro ship was 203 cm long. The underside was heavily worn, which indicates that the ship was often pulled ashore. The ship was large enough for sea transport but the keel was flat and could therefore sail up the Kongeåen, where it was found 1,300 years later.

The fragment of the bow. Photo: The Antiquarean Collection, South-west Jutland Museums.

The underside of the keel was worn and indicates that the ship was often pulled ashore. Photo: The Antiquarean Collection, South-west Jutland Museums.