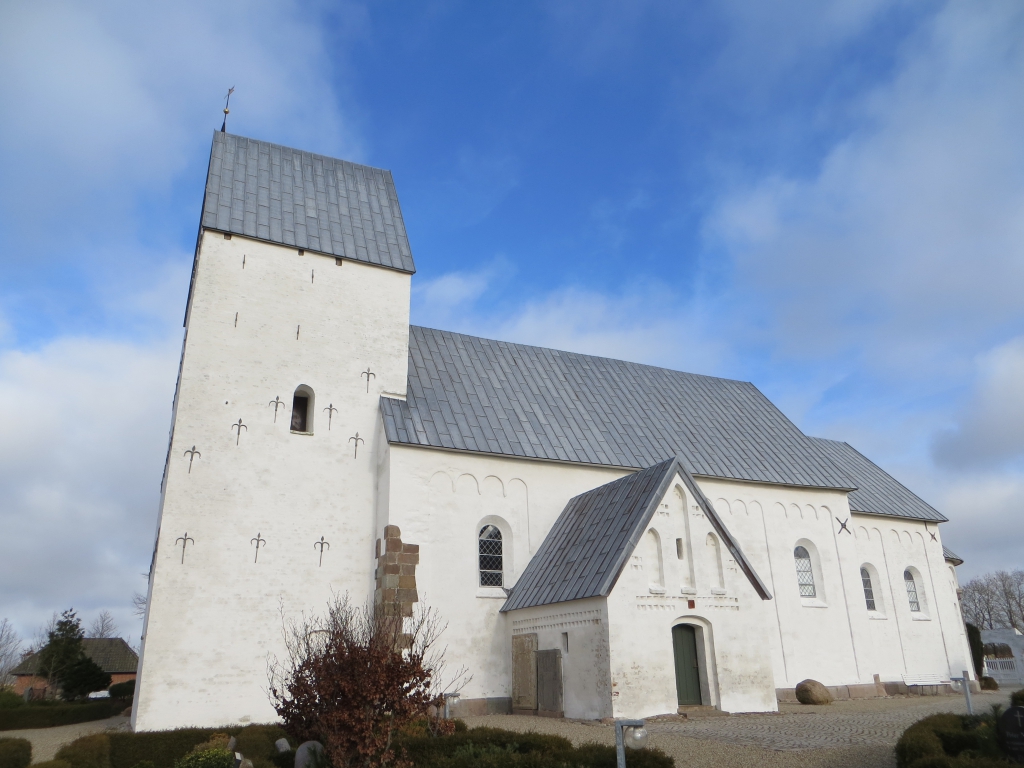 Jernved Church was built in around 1175. Photo: Charlotte Lindhardt

Jernved Church is one of the region's oldest tufa churches. The church is probably dedicated to St. Nikolaj, as his relief can be found on the church bell from 1444. He protected sailors, and many churches along the coasts and rivers are devoted to him, including Vilslev and Farup and the market towns Kolding, Aabenraa and Middelfart.

The first time Jernved Church is mentioned in written sources, is about 1291 in Ribe Oldemoder, which is a list of Ribe Cathedral’s possessions. Jernved Church paid 5 skillings of silver annually to the cathedral, and in 1560 the church was placed under the bishop's revenue. Although in 1777-1778 the king and bishop disagreed on the ownership, it seems that the church belonged to Ribe Cathedral until 1867, when the residents of the parish bought it. In 1911 Jernved Church became an independent church. 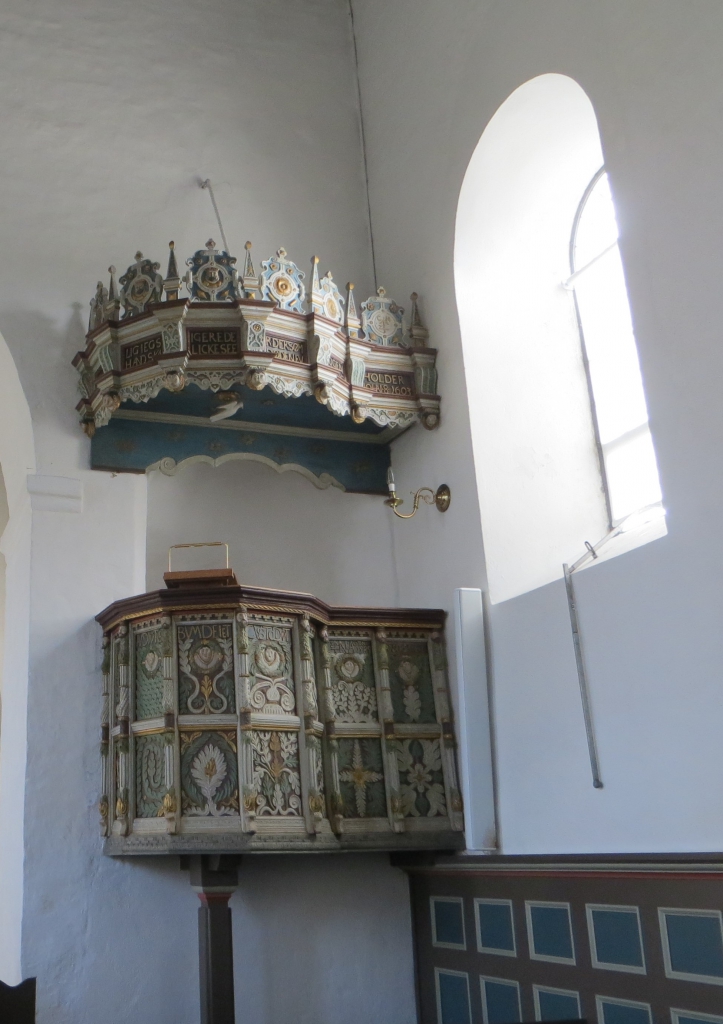 The pulpit was built by Anders Katkier in 1585. Photo: Charlotte Lindhardt

The chancel, nave and apse were built in Romanesque style around 1175. The base is granite, and the building itself was constructed in tufa imported from the Rhine area. Some corners are decorated with granite. Vilslev Church and the east wing of Ribe Cathedral are also built in tufa and in the same building style at the same time as Jernved Church.

The builder made a precise plan for its construction, and therefore the church is one of Denmark’s finest tufa churches. It has unusually high walls, and the floor plan has been laid by using a 27 cm measuring unit. The nave was built over two squares, and it is exactly twice as long as it is wide.

The tower to the west was built in bricks in around 1250-1350 and got its present appearance in the 1500s. The porch is from the latter half of the 1400s and is also built of bricks.

In 1865-1866 it underwent a major renovation. The tower's south and west sides were reinforced with facing walls. The chancel and apse had to be completely re-walled, and large parts were demolished. When it was rebuilt, the original architecture preserved, but red bricks were used instead of tufa.

The mortuary at the cemetery was built in the 1968. 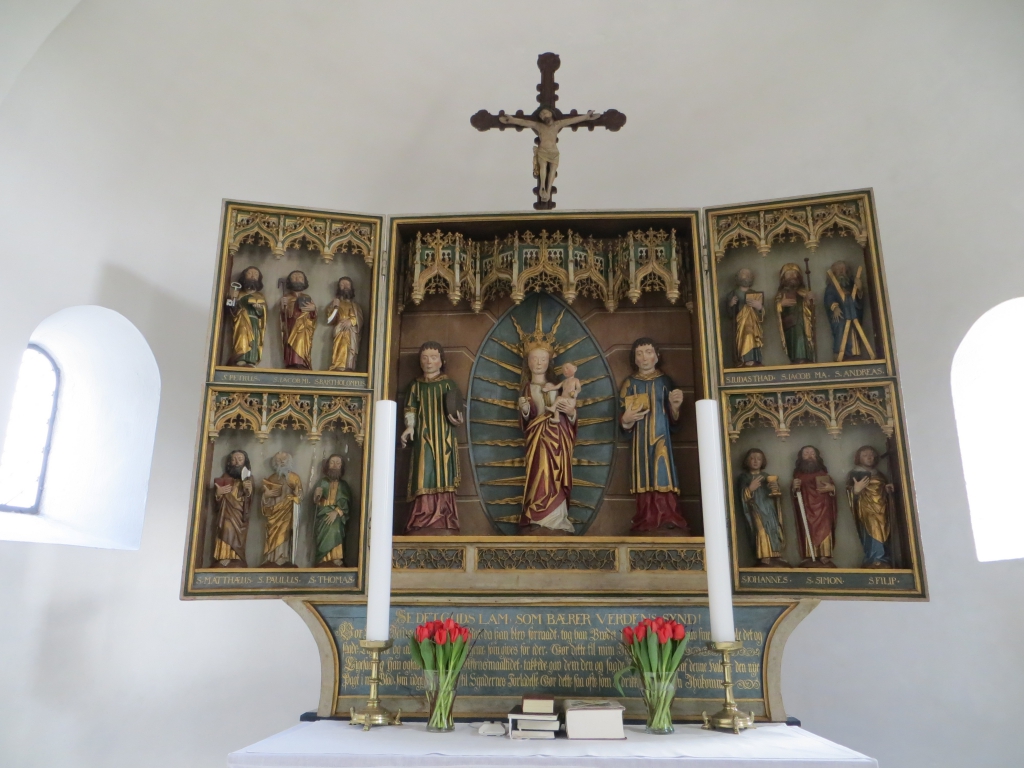 The altarpiece is carved in a late Gothic style. Photo: Charlotte Lindhardt

The Romanesque font in typical west Jutland style is the only original fixture.

The altarpiece from 1475-1500 is carved in late Gothic style and has Maria with the child at the centre. She is surrounded by two saints, St. Vincent and St. Laurentius and the side wings show the twelve apostles. The altarpiece has been repaired several times. In her right hand, Maria is holding a small apple, which was originally a sceptre. Moreover, St. Laurence’s grill has disappeared, and parts of the wood have been replaced with mahogany. The crucifix above the altarpiece is from about 1400-1425.

Above the dome is a large crucifix from 1300-1400s. It is special because it was designed as a copy of the style that was used in the 1200s.

The pulpit was built by Anders Katkier in 1585 and is decorated with foliage, angels and male heads, and the canopy above the pulpit is from 1603.

The church no longer has any visible frescoes. Previously there were French lilies made by the Lily master, whose name is unknown, but at the beginning of the 1500s decorated several churches in Jutland with his characteristic lilies, including churches in Horne, Højst and Nørre Løgum. In the late 1600s, the nave was decorated with portraits of 10 bishops, which have now been whitewashed over. 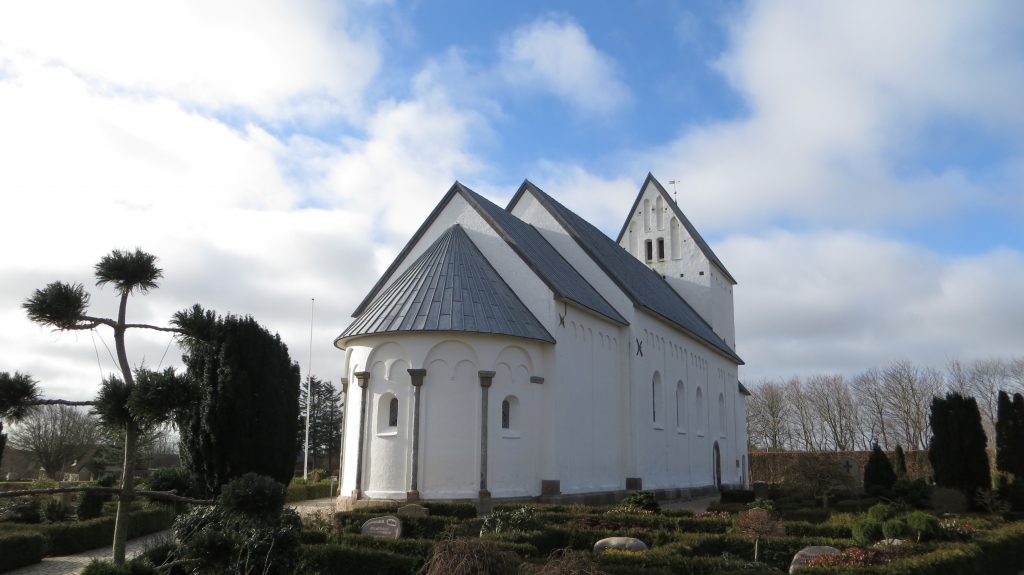