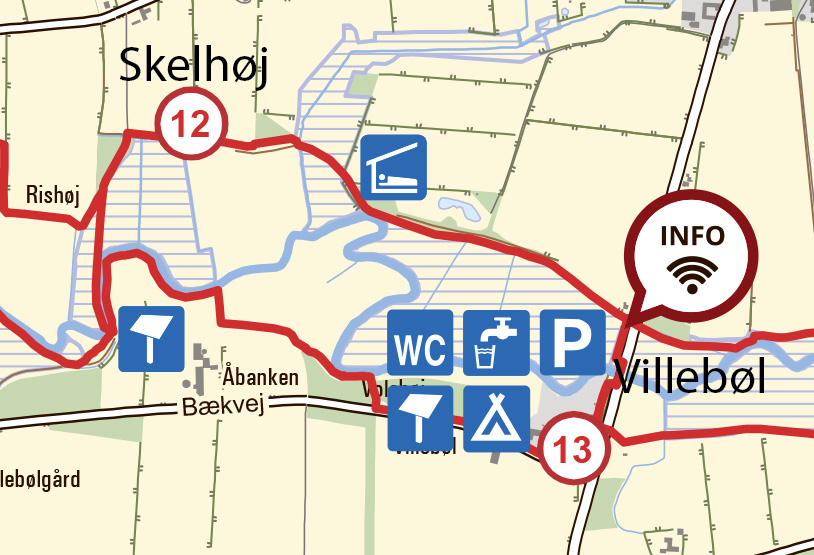 Start your trip by the rest area by Villebøl south of Tobøl. Here you will find a digital information display where you can read about the river Kongeå's nature and history and download an APP with maps to take with you on your trip.

The tour starts by following the field track on the north end of the rest area. It is 700 metres to a lovely shelter area with campfire area, picnic table/benches and views of the river Kongeå. From the shelter area, you walk into a landscape dominated by the many large burial mounds. The most significant one is Skelhøj. Halfway around your tour, you will come across one of the new large wooden bridges that was built over the river Kongeå when the Kongeå Path was initially established. On the way back, the path stays close to the river and you will be able to experience the wonderful Kongeåen nature at close hand. Just before you arrive back at the rest area, you will see the farm "Kongensgave" and Kongeåens Camping. The campsite has a small kiosk.

Concrete in nature
On your round trip, you will encounter Eva Steen Christensen and Morten Modin's concrete sculptures, which creatively combine art and function. Eva Steen Christensen's elliptical concrete bench invites you to rest and enjoy a quiet moment. Morten Modin has made a kind of concrete stepping stone structure over a swampy area, allowing you to stay dry as you cross.

Skelhøj
Skelhøj is a Bronze Age burial mound from about 1350 BC. An excavation provided insight into the construction methods used to build the burial mound. It is built in turf with the grass side facing down and was erected in sections by different teams of workers. The center of the mound has been protected by an iron cape that has preserved plants and insects in the turf.

The king's gift and Poul Bartskær
Poul Jensen lived in Villebølle and in a rage he came to kill a man at one time. The father of the murdered man was not satisfied with monetary fines and Poul had to flee the country. However, he later ventured to return to Denmark in 1643 and became a sailor in the Royal Navy. Back in Villebølle, Poul had worked as a surgeon or barber, who acted as a surgeon and wound doctor.

Poul was present when King Christian IV lost his eye in the battle against the Swedes on Kolberger Heath in 1644. There was no surgeon in the fleet, so Poul Jensen offered to help the king. He was given a farm in Villebøl and a pardon for the killing as gratitude for his help. Incidentally, the fragments from the king's eye were mounted into a pair of earrings that Christian IV gave to his mistress, Vibeke Kruse.

From Villebøl you can also make a round trip towards the east.