The burial mounds at Brokær

Ancient Burials
Southeast of Brokær are seven burial mounds from various periods of antiquity. Denmark's over 100,000 burial mounds were constructed between the stone age single-grave culture of 2800 BC and the 10th century Viking age.
Until 1100 B.C. the dead were placed in coffins and a turf burial mound was built over the coffin. From that time, archaeologists have found well-preserved clothing remains and burial offerings. After approx. 1100 BC, the dead were cremated and the remains placed in urns, which were dug down in or around the existing mounds.
Many of the burial mounds have been subject to looting, ploughing and livestock, which has damaged and destroyed the finds. This is also the case with the mounds at Brokær.

The burial mounds North of Fårevej
The southern mound is 3.35 metres high and 17-22 metres in circumference. At the top there have been foxholes, which have caused additional damage.

The southern mound is 2.90 metres high and 15-17.5 metres in circumference. The tomb may have been a victim of grave robbers, as in 1913, the National Museum described how a 7 m wide wedge had been dug from top to bottom, and that many urns were supposed to have been found with burnt legs. Later on, additional bronze age urns have been found in the area around the mound.

The western mound is 2.20 m high and 13 metres in diameter, and parts of the mound have been dug into.

It has not been possible to date any of the three burial mounds more precisely than "antiquity" with finds from the bronze age. All have been damaged by ploughing and grazing livestock. Ploughing too close to a burial mound, or when large livestock grazes and tramples on the burial mound, results in the destruction of the urns that are dug down in the vicinity of the burial mound.

The burial mounds south of Fårevej

The Eastern burial mound dates from the bronze age, approx. 1700-500 BC The burial mound is 1.90 m tall and 19 metres in diameter. It has been used as a potato furrow, and filled with sand, but in 1895 a stone sword was apparently found in the burial mound.

It has not been possible to date the Western mound more precisely than as being from antiquity. The burial mound is 2.15 m tall and 13 metres in diameter. This mound has also been used as a potato furrow and because the burial mound is located in a field, livestock has grazed on the burial mound, and foxholes have undermined it.

The burial mound is 2.70 m tall and 25 metres in diameter. It dates from between 1100 BC and 375 A.D. Unfortunately, a 5 m wide trench has been dug through the mound, because it had been used as a potato furrow. The furrow has now been filled, but urn remains and any other grave finds have been scattered or dug down. 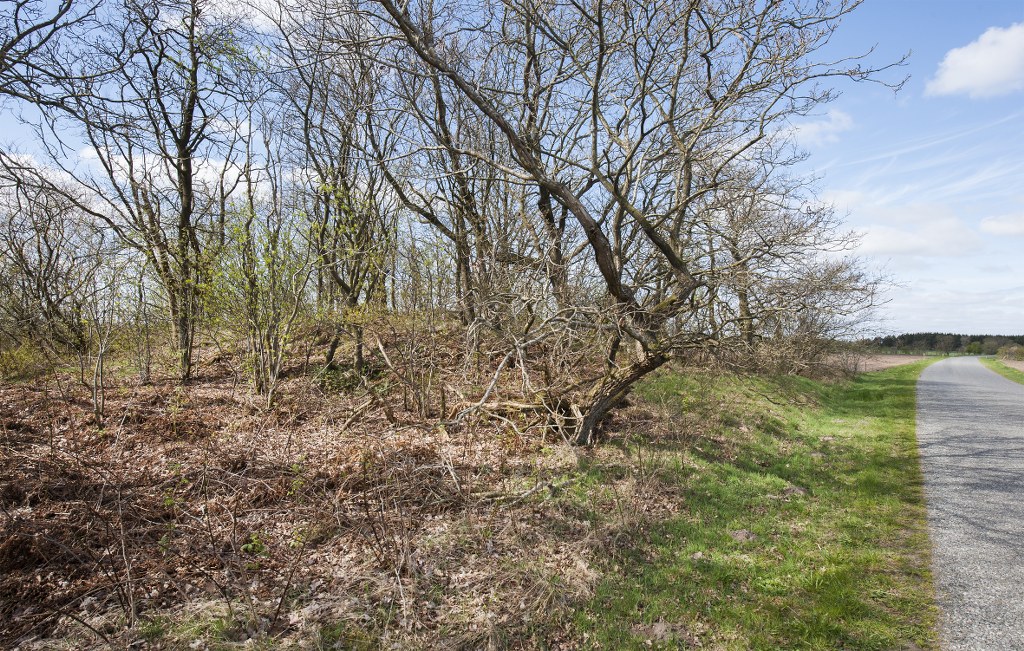