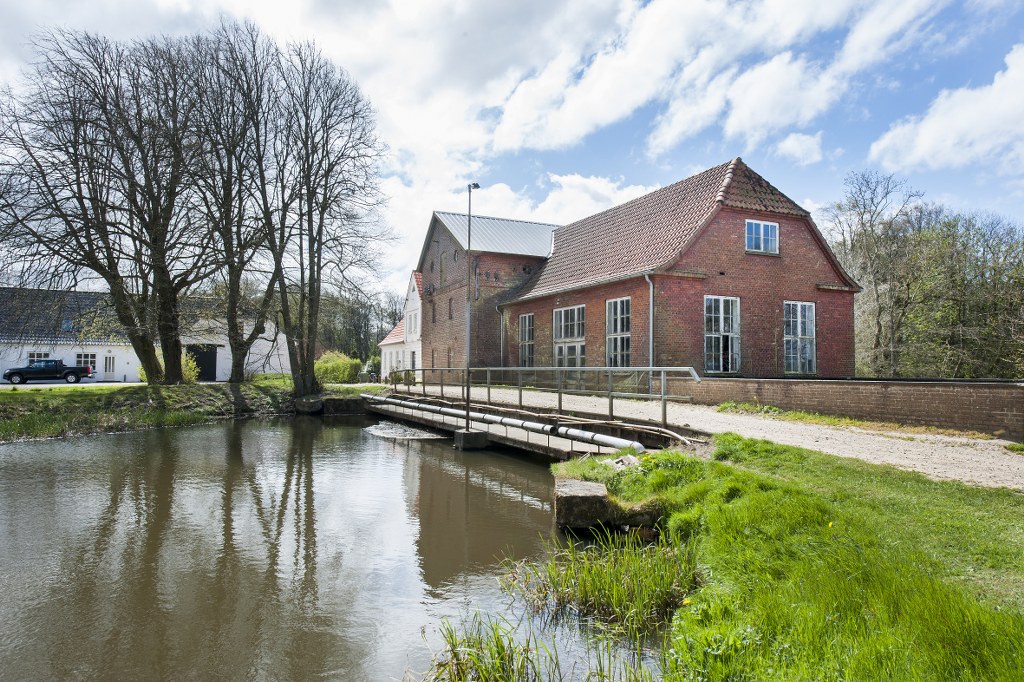 The history of Jedsted mill goes as far back as the 13th century.

Under Crown, Church and Duchy
Jedsted Mill is one of Denmark's oldest water mills and has been at the same site since the 13th century. The mill is first mentioned in 1231 in King Valdemar's Land Book, where it is called 'Estath mill'.

Antvorskov Abbey on Zealand took ownership of the mill at the beginning of the 14th century and stayed under the abbey's ownership for the next couple of centuries. In 1531, Saint Hans Priory (Priory of the bothers of the holy cross) in Ribe owned the mill until the reformation in 1536, when the Crown confiscated all ecclesiastical property.

In 1542 the Crown sold the mill to Claus Sehested, a nobleman. From the end of the 16th century, it was owned by the Rosenkrantz family from Høgsbrogaard in Hviding parish, who sold the mill to the Lindeved estates in 1613. The Lindeved estate was near Flensborg, and thus Jedsted Mill became part of the duchies. The mill continued to be managed from Høgsbrogaard, until it became freehold in 1770 and was sold to Peder Christensen.

The enterprising mill owner
Jedsted Mill's greatest period was when it was owned by Hans Joachim Fogh, between 1839-1877. In the 19th century, mills all over Denmark took on additional functions and Hans Joachim Fogh was particularly enterprising. He added an additional almost 83 acres of land to the mill after purchasing land in the Vilslev and Jernved parishes. Fogh was not just a miller, but a farmer too. He improved the waterlogged meadows by bringing in soil from more sandy areas.

He also established a distillery that operated until the early 1850s. Home distillation was outlawed in 1804 and was only permitted at official distilleries that paid tax to the state. Jedsted mill however,  was authorised as a country distillery.

Fogh also ran a bakery and the mill had a grain mill, stamping mill and a bonemeal mill. In 1877 he sold the establishment for the vast sum of 106,000 crowns, for the mill, its land, inventory, movable items and staff.

The following owners were also both farmers and millers. Jedsted Mill began to face increased competition after the Act on Free Mill Operation in 1852, which allowed anyone to set up a mill.

Fish farm since 1904
Kongeå river has a large trout population, and in 1904 Jedsted mill was acquired by the newly created Jedsted Mill Fishery, which established the trout farms. The agricultural areas were leased out, and the mill was downscaled and finally closed in 1917. When the trout had grown big enough to eat, they were transferred to large oxygenated containers and shipped by train to major cities, including Berlin.

The fish farm went bankrupt in 1909 and was sold to Fyns Landmands Bank, who founded A/S Kongeåen Ferskvandsfiskeri (Kongeå Freshwater Fisheries Ltd). In this period, the tenant established an orchard, a plantation at Jedsted hills and about 100 large and small ponds. Since then the number of ponds has been reduced, but Jedsted Mill fish farm continues to operate. 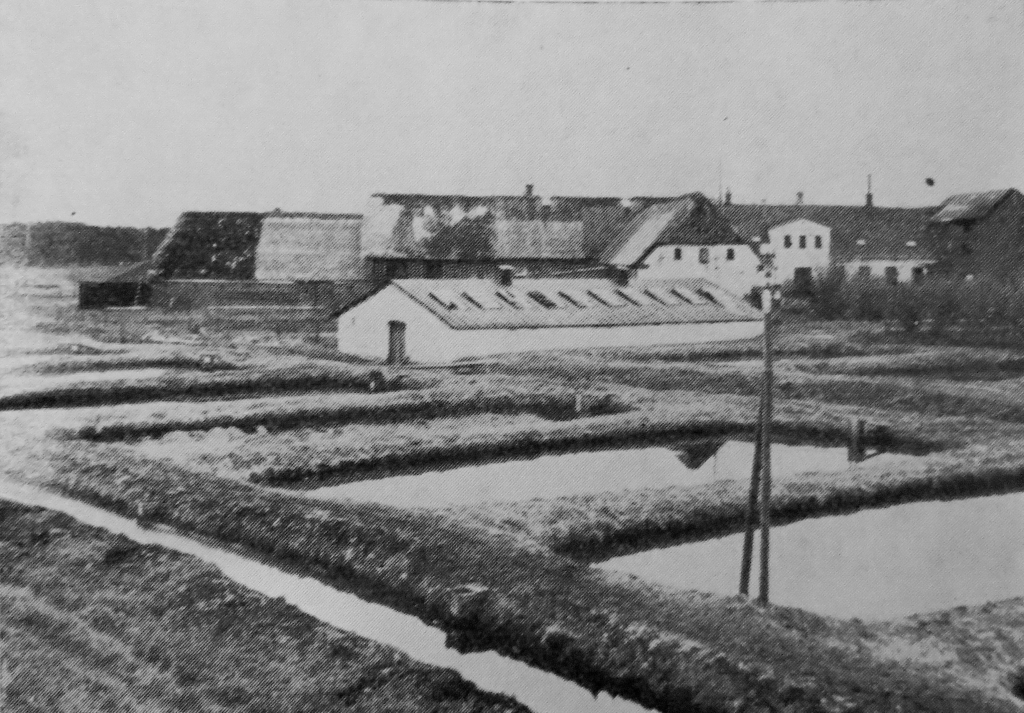 The fishponds viewed from the East.
Photo: Unknown photographer

Electric Power Station 1910-1965
In 1910 the first homes in Vilslev parish were able to switch on their lights with power from Jedsted Mill. Initially, the power station was operated by one man who was responsible for installation in private households, maintenance of the machinery and charging and accounting. He also helped out on occasion with both agriculture and fish farming.

In 1918, the residents of the parish established the Jedsted Mill  Electricity Cooperative and took over operations at the mill. During all its years of existence, there were only two administrators: Søren Lund 1910-1956 and F. G. Larsen 1956-1965. The power plant was closed down in 1965 but the fish farm continues to contribute to the productivity of the Kongeå. 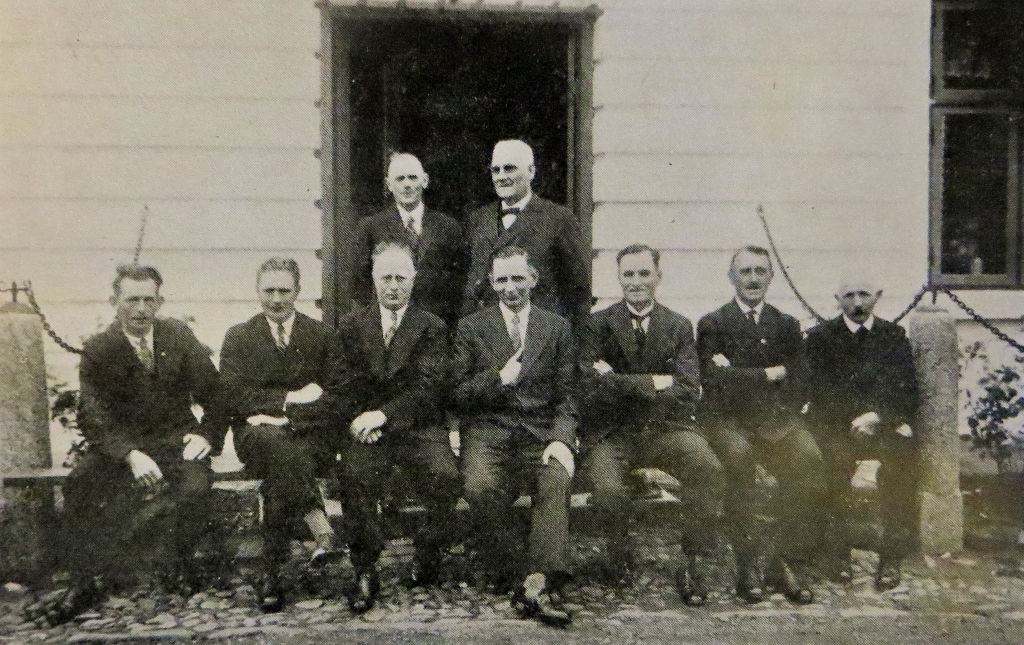 Management and workers at the fish farm and electricity plant in 1934.
Photo: Unknown photographer