West of Københoved are two huge craters, one on each side of the road to Foldingbro. They are about ten metres deep and together they cover just under 6.5 hectares, the equivalent of 10 to 11 football pitches.
The craters are manmade. From 1912-1932,  this was the location of Jutland's most probably largest marl bed and Skrave Sogns largest employer. The marl was driven out to farmers both north and south of the river Kongeå. South of the river, marl was delivered from Lintrup in the west to Skudstrup in the east, north of the river from Vamdrup, Lunderskov and Jordrup in the east to Føvling in the west. 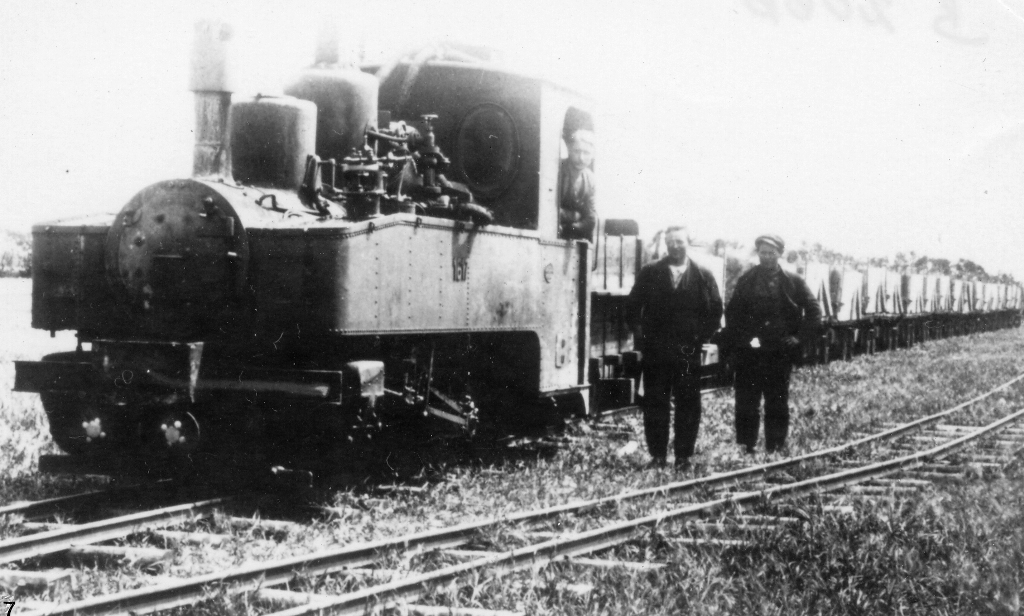 Tipper Train wagons from the marl beds in Københoved.
Photo: Vejen Lokalhistoriske Arkiv.
Marl Adventure
The marl adventure in Københoved was intense but short-lived. It started with Jens Nikolas Østergaard's purchase of Brogård in 1907. He bought the farm because he knew that the soil contained marl.
Marl is a calcareous kind of clay, which was previously used for soil improvement. Jens Nikolas Østergaard got both the German authorities and the Danish Heath Society to investigate the extent of the deposit and the quality of the soil. The occurance was great, and the quality was good. He was not personally responsible for the extraction of marl, but sold the mining rights to marl companies.
Workers from Poland
Several marl companies have operated in the bed. The first was Mergelverband Kjöbenhoved, which dug for marl in Københoved from 1912 to 1914. The Association consisted of farmers from the municipalities of Langetved, Københoved, Skodborg, Hjerting, Lintrup, Mejlby and Dover.
The company hired a contractor to undertake the work. They used mainly Polish workers from Galicia. The marl bed buzzed with activity. Around 100 men worked in the bed from early spring to late autumn. In winter they travelled back home to Poland.
The Polish workers spent nearly all their time in the bed. They lived in a large barrack on the site and there was a canteen to provide meals for them. The marl was taken away by the marl track, which was a narrow-tracked railway. 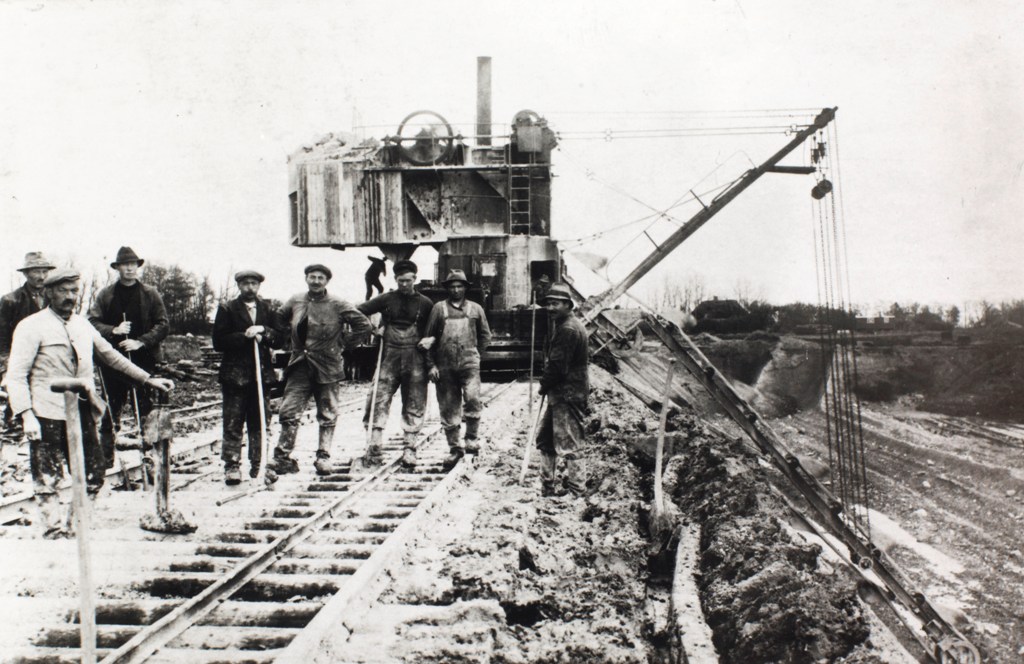 Vejen-Brørup Marl company
In 1914 the Vejen-Brørup Marl Company  took over the marl bed in Københoved. The company was founded on November 4, 1911 at Hansens Hotel in Vejen and in 1912, the Danish Heath Society signed a contract on behalf of the company with the German contractor in Københoved for the supply of marl to farmers north of the border.
The delivery began in spring 1914 but stopped abruptly with the outbreak of the First World War on August 1. The border was immediately closed and the railway bridge over Kongeåen was demolished. The Polish workers quickly left. They had been called to join the German military service. The contractor had only managed to supply about a third of the agreed marl quanity of 82,453 cubic metres.
New organisation
Delivery was only resumed in 1922. The organization was now quite different. The Vejen-Broerup Marl Company now had to provide their own equipment and crew for digging marl, while the contractor would only be responsible for the delivery. The German constructor stopped and was replaced by the contractor company Svendsen & Kjær.
The Vejen-Brørup Marl Company operated in the bed from 1922 to 1926. They managed to extract 248,000 cubic metres of marl and 10,000 hectares of farmland north of Kongeåen was marled.
Marl scrubbers
About 80 men were employed in the bed. The workforce consisted of a mixture of local farm workers and marl scrubbers. The deliveries were taken out on the marl track. The company had its own railway bridge across Kongeåen.
Production was resumed in the bed in 1930 by Skodborg Omegns Marl Company. This time the deliveries were taken out with trucks. The company only operated for a short time and in 1932  marl digging in Københoved was irrevocably over.
Literature
Tybjerg, Bjarne: Historien om eventyret ved Kongeåen, I Historisk Årbog for Rødding-egnen 2003.
Hansen, Bent: Mergelselskaber omkring Københoved Mergelleje, I Tipvognen, Hede-lands Veteranbane 2.10, p. 14-24 and p.10, p. 10-19.
Author: Linda Klitmøller, Museum curator, Sønderskov Museum
Geografi
Boygård, Københoved